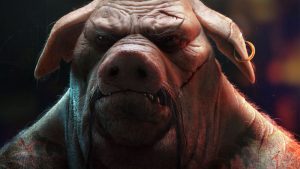 I recently wrote about the nastiness that is the Tory Party these days, with people like Johnson, Rees-Mogg, Redwood, etc., shouting for Brexit whilst being cushioned from its effects. To this list, of course, could be added Farage (who got dual nationality for his children, so they won’t be restricted in the way he has managed to get most other children in the UK restricted) and Davis, who completely screwed up his job as Brexit secretary but now earns £3,000 per hour (yes, you read that right) as advisor to JCB.

But please don’t think Labour are any better. The Archbishop of Canterbury has recently sided with many others suggesting Corbyn is anti-Semitic and there are plenty of pictures showing Corbyn happily associating with known terrorists. Not someone we would want running the country, surely?

So let us think about JCB – their bosses want Brexit too. Could this be because they don’t really sell anything to Europe and think the company will benefit from a lessening in employment laws after the UK leaves? Because if so then they have nothing to lose, everything to gain.

Another ardent Brexiteer is Tim Witherspoon, of course. Could this be because he can source cheaper food, with lower standards of quality and hygiene, from the US? (And, of course, benefit from a lessening in employment laws after the UK leaves). There was recently an outcry (not amongst the Brexit voting public, obviously), over chicken safety since chlorine washing was shown to fail bacteria tests. Witherspoon is known for cheap food, though, not quality, and if he can pay even less for food then I am sure this will make him very happy.

So let’s look at the UK success story, Dyson. Another ardent Brexiter, though slightly more obvious what he is actually like since he has just relocated his HQ to Singapore. Sure, he will spin this as nothing to do with Brexit, but the reality is that it provides Dyson with enormous flexibility on where it pays tax (Singapore is a low tax society) and, again, nicely abstracts Dyson from any negative impacts of Brexit. Dyson says that Europe isn’t a big market for them, and this may be true (though it is a market they participate in). But this is because their competition is the likes of Samsung and Miele. Dyson could raise their quality to compete with Miele, or lower their prices to compete with Samsung: maybe the move to Singapore will help with the latter. And then their business in Europe can grow substantially because let us not forget, Singapore has a free trade deal with Europe.

One rule for the vocal Brexiteers, and one for the rest of us.