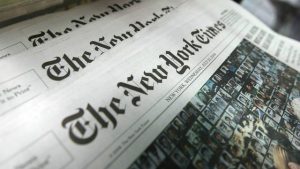 I have just read a piece dated Feb 5, 2019, from the New York Times, fact checking a speech President Trump gave to a joint session of Congress for the annual address. Many thinking people know that there is very little correlation between what he says and the truth – sometimes he tells the truth, sometimes he lies. Truth is out of fashion now – I realise that – but I still like it, so I thought the article was very interesting. I copy it in full here…

President Trump appeared in front of a joint session of Congress for the annual address. Here is how his remarks stacked up against the facts.

President Trump leaned hard on the strength of the American economy during his second State of the Union address on Tuesday, but with a blend of precise statistics and gauzy superlatives that are much more difficult to measure.

He also returned to a theme that dominated the second year of his presidency — a quest for a border wall with Mexico to cope with what he said is a crisis of crime and drugs in the United States caused by illegal immigration.

The two issues dominated his address, which in tone was more measured than his biting Twitter feed, but in substance contained numerous claims that were false or misleading.

Here is what Mr. Trump said and how it stacked up against the facts.

“The U.S. economy is growing almost twice as fast today as when I took office, and we are considered far and away the hottest economy anywhere in the world.”

The American economy expanded at an annual rate of 3.5 percent in the third quarter of 2018. Growth in Latvia and Poland was almost twice as fast. Same for China and India. Even the troubled Greek economy posted stronger growth. And a wide range of economic analysts estimate that the growth of the American economy slowed in the fourth quarter, and slowed even further in the first month of 2019.

“We recently imposed tariffs on $250 billion of Chinese goods — and now our Treasury is receiving billions and billions of dollars.”

Since Mr. Trump imposed tariffs on certain imports from China — and imported steel and aluminum from around the world — federal tariff revenues have increased. Revenues from customs duties, which include tariffs, rose by $13 billion in the third quarter of 2018 compared with a year earlier, the Commerce Department reported. Technically, that money is paid by Americans who bring the goods across the border, and it is often passed on to American consumers in the form of higher prices.

The Trump administration has slowed the pace of adopting new rules, and it has moved to roll back some existing or proposed federal regulations, particularly in the area of environmental protection. The White House claimed that as of October, a total of $33 billion worth of future regulator costs had been eliminated. But experts say the scale of the rollbacks in the Trump era still does not exceed extensive cuts in federal rules during the Carter and Reagan administrations, when rules governing airline, truck and rail transportation were wiped off the books, among other changes.

“We have created 5.3 million new jobs and importantly added 600,000 new manufacturing jobs — something which almost everyone said was impossible to do, but the fact is, we are just getting started.”

The Bureau of Labor Statistics reports that since January 2017, when Mr. Trump took office, the economy has added 4.9 million jobs, including 454,000 jobs manufacturing jobs. Far from being “impossible,” that is closely comparable to the pace of job creation during some two-year periods during the Obama administration, and significantly slower than the pace of job creation in manufacturing in the 1990s.

Wages were “growing for blue-collar workers, who I promised to fight for. They are growing faster than anyone thought possible.”

Wages are rising faster for construction and manufacturing workers than workers in service occupations, according to the Labor Department.

“More people are working now than at any time in our history.”

“The border city of El Paso, Tex., used to have extremely high rates of violent crime — one of the highest in the entire country, and considered one of our nation’s most dangerous cities. Now, immediately upon its building, with a powerful barrier in place, El Paso is one of the safest cities in our country.”

El Paso was never one of the most dangerous cities in the United States, and crime has been declining in cities across the country — not just El Paso — for reasons that have nothing to do with border fencing. In 2008, before border barriers had been completed in El Paso, the city had the second-lowest violent crime rate among more than 20 similarly sized cities. In 2010, after the fencing went up, it held that place.

“San Diego used to have the most illegal border crossings in our country. In response, a strong security wall was put in place. This powerful barrier almost completely ended illegal crossings.”

Border apprehensions decreased by 91 percent in the San Diego sector between the 1994 fiscal year, right after the original border fencing was completed, to the 2018 fiscal year. But, according to the Congressional Research Service, that fence alone “did not have a discernible impact” on the number of immigrants crossing the border into the United States illegally.

“As we speak, large, organized caravans are on the march to the United States.”

At the end of January, a new caravan of thousands of migrants from Central America was headed north, and some of the travelers said they intended to try to cross into the United States. But many in the caravan have said they plan to remain in Mexico, thanks in part to policies put in place by the new Mexican government. President Andrés Manuel López Obrador has made it easier for Central Americans to get visas and work in Mexico. President Trump’s warnings of an imminent invasion from new caravans is overstated.

“I hope you can pass the U.S.M.C.A. into law, so we can bring back our manufacturing jobs in even greater numbers, expanding American agriculture, protecting intellectual property, and ensuring that more cars are proudly stamped with the four beautiful words: Made in the U.S.A.”

The revised trade deal with Canada and Mexico, known as the United States-Mexico-Canada Agreement, does include provisions that are intended to bring manufacturing jobs back to the United States — like minimum wage provisions for some auto manufacturing. But some economists have said those provisions could ultimately push more manufacturing — and jobs — outside North America. The deal does allow American farmers to sell more dairy products to Canada. But the trade pact has yet to be approved by Congress, and both Democrats and Republicans say that is unlikely to happen without significant changes.

“When I took office, ISIS controlled more than 20,000 square miles in Iraq and Syria. Just two years ago. Today, we have liberated virtually all of the territory from the grip of these bloodthirsty monsters.”

The Defense Department reports that the Islamic State now controls only around 20 square miles of territory in Syria, down from 34,000 in 2014. But many of the gains against the Sunni extremist caliphate began under President Barack Obama, with the Trump administration continuing Obama administration policy. And the top American military commander in the Middle East told a Senate hearing on Tuesday that the Islamic State could return if the United States and its allies abandoned the fight. In December, Mr. Trump announced he was withdrawing American troops from Syria.

“We condemn the brutality of the Maduro regime, whose socialist policies have turned that nation from being the wealthiest in South America into a state of abject poverty and despair.”

This has become a popular talking point among American conservatives. It is true that the rule of President Nicolás Maduro of Venezuela has brought that country to economic ruin. Inflation is at astronomical rates, and ordinary people are struggling to get basic food and health supplies. Three million citizens have fled. Some of the collapse can be traced to Mr. Maduro’s economic policies, which do fall under the broad label of socialism. But analysts say that corruption, the lack of rule of law and the absence of democracy — all the hallmarks of a dictatorship — have played just as big or larger roles.

“If I had not been elected president of the United States, we would right now, in my opinion, be in a major war with North Korea.”

There is no evidence.

In 2016, at the end of the Obama administration, there was no sign that the United States and North Korea were about to go to war, though Pyongyang had been conducting nuclear tests and Mr. Obama had continued economic sanctions. In Mr. Trump’s first year in office, he increased tensions with North Korea by attacking its leader, Kim Jong-un, in a series of Twitter posts, which prompted hostile statements from Pyongyang. Mr. Trump wrote that North Korea’s actions would be met with “fire and fury” and called Mr. Kim “Little Rocket Man.” Analysts said at the time that the chances of war between the two nations had grown because of these exchanges.

“Lawmakers in New York cheered with delight upon the passage of legislation that would allow a baby to be ripped from the mother’s womb moments from birth.”

On Jan. 22, the 46th anniversary of the Supreme Court’s landmark decision Roe v. Wade, Gov. Andrew M. Cuomo, Democrat of New York, signed the Reproductive Health Act. The new law ensures a woman’s right to an abortion in New York if Roe v. Wade were to be overturned. It does not broadly allow abortions until shortly before birth, as Mr. Trump suggested. Instead, it will allow for an abortion after 24 weeks to protect the mother’s health or if the fetus is not viable. Under the prior law, abortions were allowed after 24 weeks only if the woman’s life was in jeopardy.

“We had the case of the governor of Virginia where he stated he would execute a baby after birth.”

In an interview last month, Gov. Ralph Northam said that he supported a late-term abortion bill that would loosen restrictions on the procedure, and allow women to consult with a doctor on an abortion up to, but not including, the time of birth.

The governor, a pediatric neurologist, also talked about some of the dangerous medical emergencies that pregnant women could face, such as carrying a nonviable fetus. He said that in such a case, the mother would deliver the infant and then, “the infant would be resuscitated if that’s what the mother and the family desired, and then a discussion would ensue between the physicians and the mother.” While Mr. Northam was talking about an end-of-life care discussion in the case of a child that would not live, Republicans seized on his remarks as evidence that Mr. Northam supported killing babies after their birth.

This entry was posted in Commentary and tagged Fact Checking, Observations, Politics. Bookmark the permalink.
This site uses cookies: Find out more.