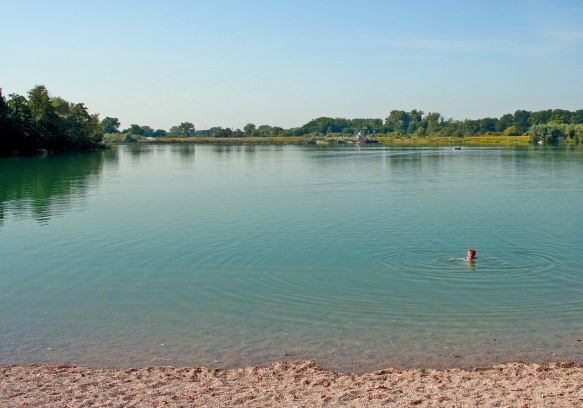 Baggersee, literally translated, means excavator lake. It is a lake that has come about after the excavation of land, and there are many of them in Germany. Some of them have been declared safe to swim in and in fine (or not so fine) weather people gather on the shores to swim. Lakeside swimming is a big thing in Germany, much more so than in the UK, because there are so many of them. You could argue that this is because the UK is surrounded by the sea, but I don’t think so: if there were many swimming lakes in the UK I am sure they would be very popular (*).

Many of these lakes are still in use, with heavy machinery situated lakeside to help excavate minerals from the bed. Large areas are cordoned off for public use and the whole recreation-next-to-industry works well. The water is, of course, not salty and there are no tides, currents, or waves. Since the lakes are relatively small bodies of water, they heat up quickly and are therefore warmer than the sea – certainly the sea surrounding the UK!

I have been to two since arriving in Germany (less than a week ago). The first had sandy shores and droves of people sitting around and swimming in the blistering heat. It only allows dogs in the winter months. The second allowed dogs in some areas (some areas are marked as nudist areas, and others just for clothed people), so we went with our dog and had a wonderful time swimming with her. This one had very few people. This might have been because few people take their dogs to the lakes. It might also have been because it was heavily raining (very heavily raining), something that has never bothered me: on the contrary, I have always loved swimming in the rain.

Possibly the most famous (and largest) lake in Germany is Bodensee, in the far south. But it is nice to see many other such lakes well used by the people. I have a friend whose family own a house backing on to a lake, and I visited there a few years ago and swam in beautiful surroundings. At the time I thought it was a one off to be able to do such a thing. Now I realise that they are located in many places, though few are lucky enough to have a house built text to one.

Maybe if I win the lottery …

* Edit – Of course, the lake district is immensely popular in the UK, and people swim and boat on many of the lakes there throughout the summer.

This entry was posted in Living in Germany and tagged Recreation. Bookmark the permalink.
This site uses cookies: Find out more.